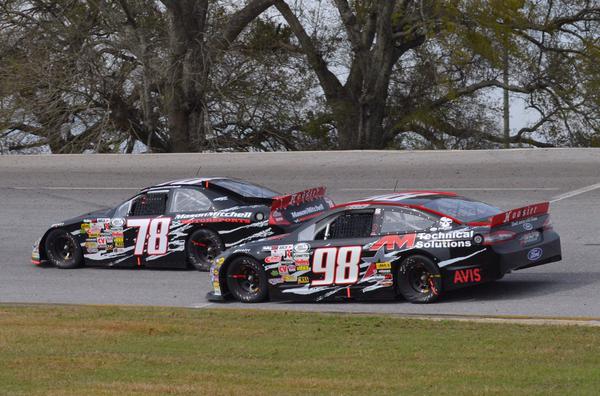 (Mooresville, N.C., March 16, 2015--) In the closing stages of the second ARCA Racing Series event of the 2015 season, the ARCA-Mobile 200 at Mobile International Speedway (MIS) it looked like Mason Mitchell Motorsports was poised for a 1-2 finish with drivers Austin Wayne Self (AWS) and Mason Mitchell. Self ran among the leaders all afternoon and led two laps before winding up fourth in his No. 98 AM Technical Solutions Ford Fusion. Mitchell led 38 laps and was biding his time before a mechanical problem struck with 38 laps remaining in the event. The 2014 ARCA champion settled for 19th.

“We had a great AM Technical Solutions Ford Fusion from the time we unloaded until the checkered flag waved Saturday” Austin Wayne Self expressed. “I learned a lot running behind Grant at the beginning that helped me later in the race. It was cool to pass my teammate Mason for the race lead. I thought we could finish 1-2. There was a lot of pushing and shoving at the end of the race that sent us back to fourth, overall it was a great weekend. I can’t thank everyone on this MMM team for working on these cars, I’m looking forward going to Nashville next month.”

“We struggled at beginning of the race with limited practice Saturday. It was the first time this car had been on-track in 2015” Mitchell stated. We had a great strategy, Grant had a great car but I think we could have beat him if not for the mechanical problem. It was really cool to see MMM cars running first and second for a bit. Austin drove a great race and I’m really proud of the way he raced. This weekend showed how strong our program is with both cars running up front.”

Persistent rain canceled all on-track activity at MIS on Friday afternoon including Menard’s pole qualifying presented by Ansell. The field would be set by 2014 owner points allowing Austin Wayne Self to start from the pole position. 2014 ARCA champ Mason Mitchell would start in the 22nd position for the 200 lap event since the No. 78 had no owner points from the 2014 season.

When the green flag waved on race number two of the 2015 ARCA Racing Series season AWS quickly slid in behind Grant Enfinger and elected to follow the veteran. Under the sixth caution at lap 52 AWS elected to give up the second position to visit pit-road. The No. 98 crew had to fix the brake fans and sent AWS back to the track in the 17th position.

AWS would show his maturity behind the wheel passing one car at a time and took the lead from teammate Mitchell at lap 143. Self led the next two circuits before giving way to eventual winner Enfinger. The 2014 Scott Rookie of The Year crossed the finish line in fourth for his first top-five finish of the 2015 season.

ARCA veteran Mason Mitchell started from the 22nd position but it only took Mitchell 11 laps to break into the top-ten. Mitchell’s No. 78 elected to make numerous pit-stops under caution to work on the cars handling. Mitchell’s No. 78 car came to life in the second half of the race. Mitchell took the lead from Grant Enfinger at lap 99. It marked the first time anyone passed Enfinger for the lead under green flag conditions. Mitchell led 38 of the races next 43 laps until teammate AWS passed the Iowa native for the lead at lap 143.

While running on the lead-lap Mitchell was forced to make an unscheduled pit-stop at lap 162 for a mechanical problem. The No. 78 would finish in the 19th position.

Next up for the ARCA Racing Series presented by Menards is the Nashville-ARCA 200 on April 11th. Arcaracing.com will have live timing and scoring for all on-track activity from Nashville.